Warley Town, a historic village in the Calder Valley, sits on the outskirts of Halifax, West Yorkshire. In the spring of 2016 Warley Community Association (WCA) ‘adopted’ the disused BT telephone box as part of British Telecom’s ‘Adopt a Kiosk’ programme.

Warley Museum is situated in the centre of Warley village, at The Maypole Inn. Opening hours are 8am-4pm.

Warley Museum was officially opened on Saturday 8th October, 2016 by the Mayor of Calderdale, Howard Blagbrough; the Mayoress of Calderdale, Catherine Kirk; and Richard Macfarlane, Collections Manager at Bankfield Museum.

Local brass band, the Friendly Band, along with the Sowerby Bridge Morris Dancers, provided the traditional entertainment for this very special event.

Eliana Bailey, WCA chairwoman, said: “We’ve had a phenomenal response. People thought it was amazing. When they saw inside they could not believe it.” 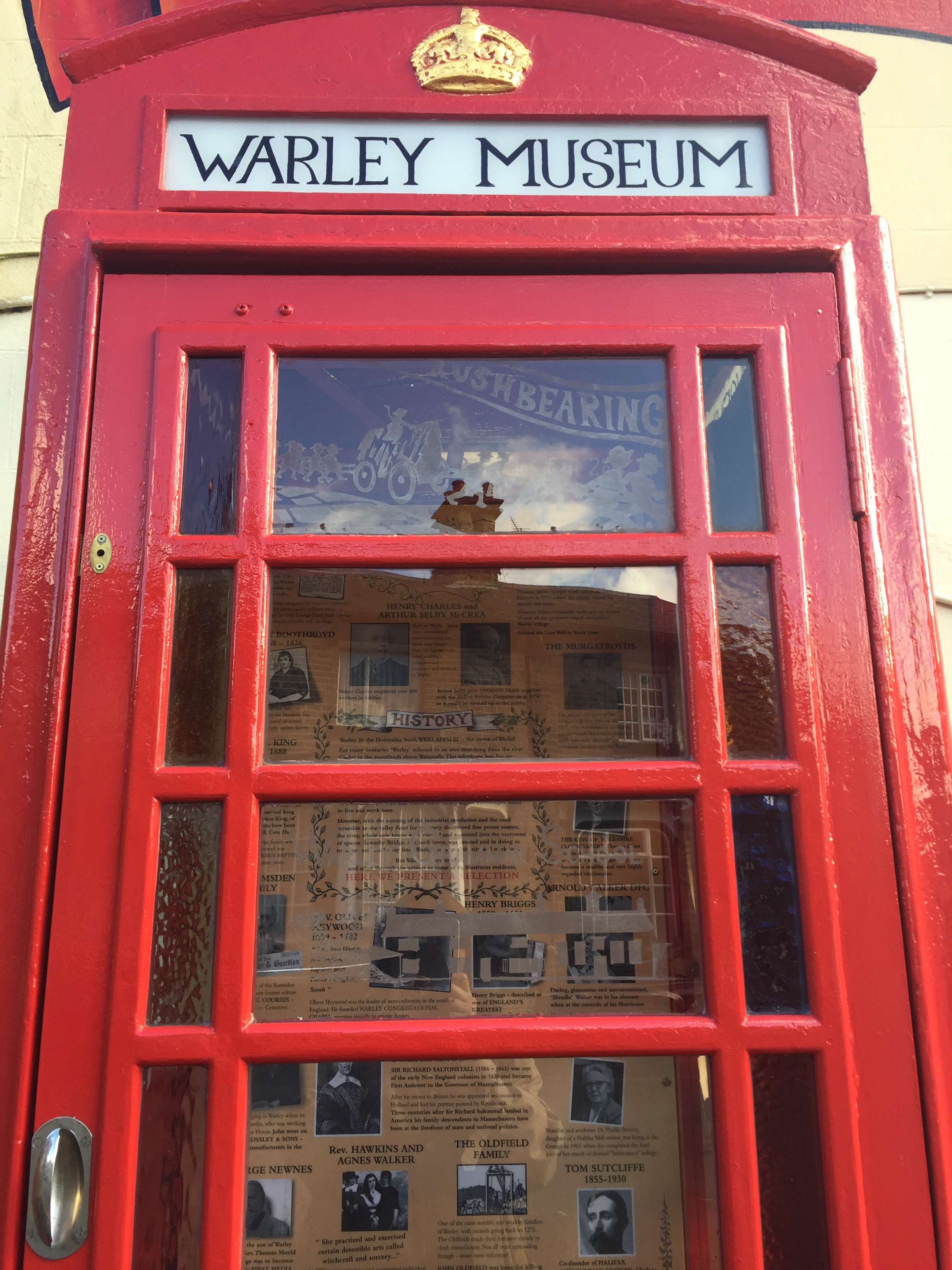 Read the story and see the official photos of the Grand Opening of Warley Museum in local and national press online:

After considering a number of options, including a defibrillator station and a library, WCA members voted to transform the telephone box into a unique museum of local history. Eliana Bailey and Kathryn Gallagher coordinated the project, which utilised the knowledge and talents of local residents.

Key figures in the concept and creation of Warley Museum were resident artists, Paul and Chris Czainski, the curators of the museum.

Doug Bailey, a joiner, renovated and converted the telephone box, which involved stripping it back to its bare bones, then repainting and refitting it.

Paul Czainski produced the wonderful etchings on the glass panels, which feature scenes of local history. He also designed and illustrated the information backboard, ‘Notables of Warley Parish’.

Chris Czainski is working on a mosaic floor made from old pottery and objects d’art found in Warley gardens.

The museum’s exhibits of local historical artefacts and curiosities, donated by Warley residents, will be changed every few months. These are displayed in secure boxes which can be viewed from both inside and outside the museum.

The museum was famously visited by Monkman and Seagull in Episode One of their Genius Guide to Britain on BBC. The episodes regularly appear on Iplayer.

An application has been made for Warley Museum to be included in the Guinness Book of World Records.